Wet days in the woods aren’t for every food fan, but if you love mushrooms and the outdoors too then maybe foraging is for you. Foraging expert Marlow Renton from Wild Food UK aim to brighten up those rainy days for aspiring gourmands who want to go wild. Wild Food UK runs a range of foraging courses throughout the year but specialises in fungi during the bountiful autumn season.

Marlow explains: “Most people start to get a bit glum as summer is coming to its end, but though we love the sun, autumn is the season that really gets us going. We look forward to rainy days at the beginning of September, because foraging for mushrooms is our passion! The majority of the tasty mushrooms grow in autumn and they grow in abundance with the help of a few good showers.”

Mushrooms are available all-year-round if you know what to look for but autumn is when the woodland mushroom show really begins, with thousands of species coming into fruit. In spring and summer, we find most of our edible mushrooms in meadows or on trees and tree stumps, but that all changes around the first rains in September.

This does depend slightly on where you are in the country as mushrooms react to slight changes in temperature and moisture levels, both of which vary as you go further north.
Marlow continues: “We are confident of finding Chanterelles in the Peak District (Midlands) every time we go there in August.
In Scotland, mushrooms like chanterelles and ceps can be found quite regularly from June onwards, but in the South we have to generally wait for the first good rain in September to find those sorts of prizes.”

Some of Marlow’s foraging favourites below:

Giant Puffball. It grows into a foot-wide ball and looks like no other fungus. This mushroom is very tasty, with a lovely strong mushroomy flavour but we don’t recommend just frying big slices of it in butter. If you do then the flavour is great but the texture lets the mushrooms down, it becomes floppy and can be a bit slimy. We recommend frying the mushroom then letting it cool a bit before dipping it in beaten egg, then some seasoned breadcrumbs. Then fry again until the breadcrumbs are crispy. 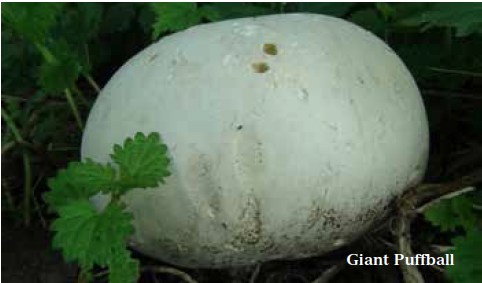 Oyster Mushrooms get their name because of the wavy oyster shell like edge to the caps of the mature specimens. When young there are some lookalikes for the Oyster Mushroomthat you don’t really want to eat, none are deadly though. Most notably the oysterling which looks very similar to a young oyster mushroom. So for the novice forager we recommend
only harvesting mature specimens with a cap of over 10cm in diameter. That way you will be 100% safe if the mushroom has the following features: Oyster Mushrooms attach to the wood they are growing from with a stem, and grow from almost any type of dead wood; they are a gilled mushroom, not a polypore, so if there is anything apart from gills under the cap, it’s not an oyster mushroom; those gills are its last key identifyer, they
run down the stem very far, often all the way to the wood the mushroom is growing from. 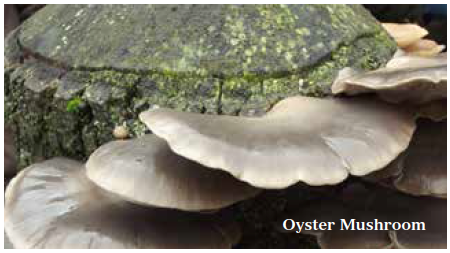 Penny Buns (also known as Porcini, Cep, King Bolete) This is a safe mushroom to pick as long as you follow some simple rules. The Penny Bun mushroom is in the boletus family of mushrooms. That means that under the cap it has a sponge; it doesn’t have gills; ever, so if you have found a mushroom with gills it is not a Penny Bun! I emphasise this point because I have heard of poisonings involving people eating gilled mushrooms thinking they were Penny Buns. There will be no skirt on the stem of the Penny Bun but there is a webbing effect on the white stem near to where it meets the cap. With the Penny Bun the sponge will be white, the flesh will be white,
the stem will be white, and the cap will start whitish when very young, quickly becoming brown as it matures. When cut the flesh will not stain any colour at all. This and other members of the Boletus family are my personal favourite mushrooms to eat in any way. The texture and taste are lovely, fresh and can be used in the same way as any normal mushroom. Generally when you buy Penny Buns, or Porcini as they are known in the shops, you buy them dried for soups or stew type dishes. We favour the air drying method: cut the mushrooms to about half centimetre slices, put them on a wire rack and point a fan at them until they are dry. This preserves all the fresh flavour. 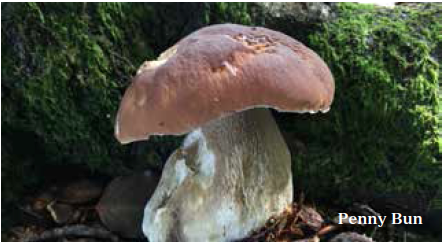 Top tips for Autumn foraging:-
> Go out two or three days after a good rain shower.
> Check the trees in your area; look for older mature trees, especially Beech and Oak, as these will have the widest variety of fungus growing with them.
> Look in the same place twice! Just because there aren’t mushrooms in your woods one week, it doesn’t mean they won’t be there next time.
> Never eat anything without confirming its identification in at least three separate sources.
> When starting out, go on a course where a tutor can give you a hands-on experience, identifying and picking mushrooms. This is the best way to learn the basics and build confidence.
> Stay Safe, and have respect for your environment, pick one specimen only for ID purposes until you are sure of what you have.