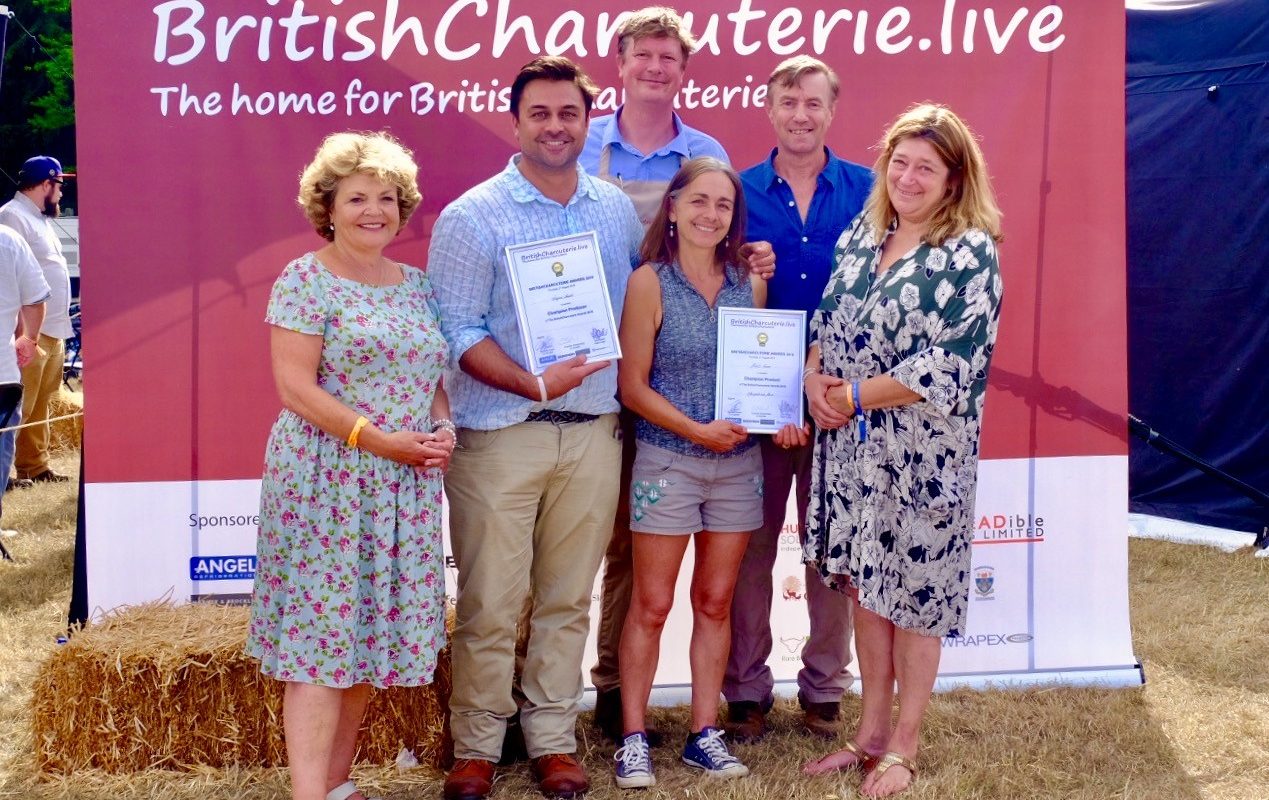 The British Charcuterie Awards, organised by BritishCharcuterie Live, were held for the first time in August 2018 at BBC Countryfile Live.

“British charcuterie is showing such dynamic development, we felt the time was right for all producers, artisanal or larger-scale, to have an appropriate public showcase for their diverse ranges,” says co-founder of the awards Henrietta Green, originator of the FoodLovers movement, food consultant, food writer, and one of the leading authorities on British local and regional speciality foods.

There are estimated to be over 300 British charcuterie producers in the UK at present, and the sector is growing. “British charcuterie is much more than just mirroring our foreign cousins. Our producers create great-tasting new products, some new with distinctly different ingredients and characteristics, and others echoing our heritage.”

432 products made by nearly 100 British charcuterie producers were tasted and judged over nine classes by 33 expert judges, who also selected the two Champions based on their scores across nine different classes.
Dhruv Baker, Champion Producer commented: “I’m flabbergasted at the result, we’ve been producing charcuterie for just six months, although there’s been a lot of blood, sweat and tears in developing the range going back several years. I’m delighted to be a winner, and it’s a great motivation for us to carry on with what we do.”

Phil and Melissa Beal, Champion Product winners said: “What stands out for us is the strength in the competition, the sheer amount of product getting gold and silver is the best thing ever for British charcuterie. Winning Champion Product is an endorsement of the hard work that small artisanal producers put in, and for us to get recognition within such a high level award makes Monday mornings worth it!”
The judging took place at BBC Countryfile Live, at Blenheim Palace on 2nd August within The BritishCharcuterie Tent which is open to charcuterie-lovers throughout BBC Countryfile Live.
The competition covered British charcuterie made by butchers, farmers, chefs, artisanal and larger-scale charcuterie makers, using pork, lamb, beef, venison, duck, poultry or game. There were some 40 entries which use meat only from rare and native breeds and some excellent heritage entries included Haslet, white puddings and Lincolnshire Chine.

The judges were struck by the diversity of the products. Restaurateur Russell Norman said: “When you try something exceptional, you want to find out where you can buy it and you want to be able to take it home to really enjoy it.” Chef Patron Adam Handling commented: “Some of the parfaits we tasted would put top chefs to shame!”. Rich Summers, of the School of Artisan Foods said: “There was great consistency, and some good techniques, but there was not enough Britishness – too many products replicated Mediterranean techniques – we should be celebrating our own British flavours.”

“We are simply delighted at the quality and level of entries for our 2018 awards,” says Henrietta Green, “We were astonished at the number of British producers currently making great charcuterie, far more than we originally hoped for, and want our 2019 awards to attract even more producers to enter. Whilst we were impressed at the competitive spirit shown by butchers, farmers and specialist charcuterie makers, we’d also love more entries from chefs based in the UK. There’s a “House Made” class devised for them, we know there are some wonderfully innovative ideas coming from the kitchens of pubs, bars and restaurant. Next year, we want more of them there for our judges to try.”

Judging was carried out blind and points were awarded for presentation, aroma, feel, eating qualities – front flavours, texture and length of/back flavours and finally for innovation and/or excellence with a maximum score of 100 points for a product.