The Bertinet Kitchen opened in September 2005 in the centre of beautiful and historic Bath. Owned and run by French baker and chef Richard Bertinet, the school offers a range of relaxed and fun courses for food lovers of all abilities and specialist baking and bread making courses for amateurs and professionals alike.

The school won the South West Tourism Award for Best Tourism Experience in 2009 and has been featured in the US television series on PBS: Gourmet’s Adventures with Ruth – A Tour of Cookery Schools Around the World.

Originally from Brittany in north-west France, Richard trained as a baker from the age of 14. Having moved to the UK in the late 1980s, he started cooking and his catering background included stints at the Chewton Glen Hotel, as head chef at both the Rhinefield House Hotel in the New Forest and the Silver Plough at Pitton in Salisbury where in 1990 he was awarded the Egon Ronay, Pub of the Year and American Express Magazine, UK Pub of the Year. In 1996, a position as Operations Director with the Novelli Group of restaurants brought him to London where in 1998 he started advising small food related businesses. The business flourished causing Richard to set up the Dough Co, his consultancy business, in 2000 and to split his time between consultancy work advising on the development of new products for several supermarket chains, teaching and writing.

In 2004, with a young family, Richard and his wife Jo decided that it was time to leave London and head West to be closer to Jo’s family. The plans for The Bertinet Kitchen began to take shape and they found the premises at 12 St Andrew’s Terrace, Bath at the tail end of that year.

The cookery school opened in September 2005 in the same month that Richard’s first book Dough was published to critical acclaim and a host of awards (IACP cookery book of the year 2006, James Beard Award for Best Book (Baking & Deserts) and the Julia Child Award for Best First Book). Richard published his second book Crust in 2007 (World Gourmand Award for Best UK Book -Baking) and Cook – In A Class of Your Own in 2010. Two immensely popular books have followed: Pastry in 2012 and Patisserie Maison in 2014.

Richard was named the BBC Food Champion of the Year 2010 at the BBC Food & Farming Awards on 24 November 2010.

Richard makes regular TV appearances on programmes such as Saturday Kitchen and An Extra Slice. 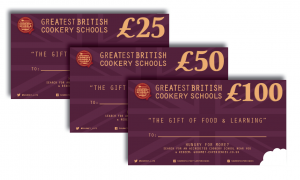